The season was produced by Mona Scott-Young for Monami Entertainment, Toby Barraud and Stefan Springman for NFGTV, and Shelly Tatro, Brad Abramson, Danielle Gelfand and Jeff Olde for VH1. Carlos King served as co-executive producer. It consists of 12 episodes, including a two-part reunion special hosted by Mona Scott Young.

Atlanta, the dirty south. A city where the underdog is only one move away from making it big. The hustle is meanest here in the A, especially for the ladies. In this town, you've got to fight to get what you want, then fight even harder to keep it. For some, the battle is about trust, in the face of betrayal. For others, it's about forgiveness, and holding onto him at any cost. And when you're married to your manager, business is always personal. There's a woman fighting for the dream. Before her, stands the haters. Behind her, heartbreak. Welcome to Atlanta, the heart of the south. With every beat, there's a battle. Cause it ain't all fair, in Love & Hip Hop.

Mimi suspects her long time boyfriend, Grammy Award-winning singer and songwriter Stevie J, of cheating after he spends too many late nights at the studio with his new artist, Joseline. Erica is struggling to find solid ground with her daughter's father, rapper Lil Scrappy, while dealing with Scrappy's overbearing mother, Momma Dee, a former pimp, and her own mother, Mingnon, a recovering crack cocaine addict who has recently re-entered her life. Karlie is looking for her big break as an artist while K. Michelle is trying to get her career back on track after an abusive relationship with a music executive. Rasheeda is frustrated with her status as an underground rapper and is contemplating firing her husband Kirk as her manager.

After its premiere, the show's audience grew substantially over the season. Its finale garnered 5.5 million people overall, cementing its status as the highest rated show in primetime on cable among adults 18-49. 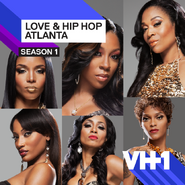