Season eight of Love & Hip Hop: Atlanta began filming in October 2018. Months earlier, on July 18, 2018, it was reported that Stevie J and Faith Evans had married in Las Vegas. On October 18, 2018, Tommie was arrested for allegedly attacking her daughter at her high school while heavily intoxicated. On January 3, 2019, while facing up to 54 years behind bars for the crime, Tommie confirmed that she would not be returning to the show. Erica Mena would also not return as a series regular, although she denied she had been fired and would later appear as a commentator for the special 40 Greatest Love & Hip Hop Moments: The Reboot, which would air during the season.

On March 12, 2019, Stevie J tweeted "Not returning for a full season. No need". Subsequently, he appeared infrequently during the season, despite being credited as a cast member in every episode. 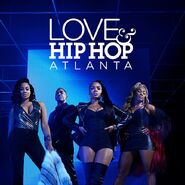