On October 23, 2018, VH1 announced that they had taken Eastern TV off the series and were looking for new producers to take the show in a new direction. The season began filming in March 2019, with Big Fish Entertainment taking over as the show's production company. It was primarily filmed in Los Angeles, California, however some episodes were filmed in Chicago and Vegas.

On July 8, 2019, VH1 announced Love & Hip Hop: Hollywood would be returning for a sixth season on August 5, 2019, along with a teaser confirming the return of Apryl Jones and Lil' Fizz to the main cast. New cast members would include Yo-Yo, rapper Micky Munday, J-Boog, Brittany B. and Akon's wife Tricia Ana. Brooke Valentine would leave the series after deciding to take a break after the birth of her child, while Teairra Marí and Moniece Slaughter would return as supporting cast members, with Moniece announcing on social media that the season would be her last. Nikki Mudarris and Nia Riley have also reportedly filmed scenes for the season, although in what capacity they will appear has not been confirmed by VH1.

This season "Love & Hip Hop: Hollywood" is giving viewers the ultimate VIP pass and a behind-the-scenes look at The Millennium Tour with B2K band members Fizz and J-Boog. Omarion's ex and the mother of his children, Apryl Jones, returns to the series while rumors circulate about her close friendship with Fizz. Marques Houston, alongside his chart-topping group Immature, return to the spotlight and possibly the stage. Power couple Ray J and wife Princess Love are living out their modern-day fairy tale while securing a legacy for Melody Love Norwood and possibly baby number two. Nineties rap sensation Yo-Yo joins the show with her signature message of female empowerment and mentors the younger artists. Kimberly "K. Michelle" Pate struggles with a complicated pregnancy journey via surrogacy. The tables have turned in the Bentley household. After a year embroiled in claims of alleged foul play by Lyrica Anderson, Floyd "A1" Bentley seems to have slipped up and is in the hot seat with rumors of infidelity and salacious headlines. Will A1 be able to stay on top of his music game, artistry and keep his marriage intact all while raising their newborn son? The new season shines a light on the fundamentals of love, life and music in the city of Los Angeles -where success is fleeting, and love's greatest foe is the limelight. 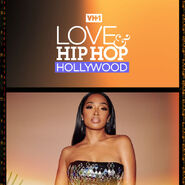 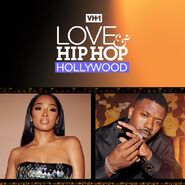 The season's teasers and trailers were accompanied with the tag lines "Watch It or Don't", "Real. Raw. Unexpected. Unfiltered", "This is Hollywood Like You've Never Seen It Before" and "The Intrigue Unfolds".

Check Yourself: Love & Hip Hop Hollywood and bonus scenes were released weekly with every episode.